Brian Jennings is the person who brought Rob Ashcraft and Larry Turner together in the form of Killbuck Creek. Brian was a member of the USA Freestyle Kayaking Team  and whitewater river guide on the Gauley River. Brian was a larger than life personality that blessed everyone with his mere presence.

In 2014 the world unexpectedly lost a legend as Brian was called to Heaven far too soon due to an unexpected medical complication. It was in his passing that Rob and Larry discovered and connected with each other then founded the Killbuck Creek Distillery together.

“My tour always starts with a picture of Brian Jennings. That’s where the story begins.” – Larry

Larry was watching the Brian Jennings memorial site as condolences poured in from around the world, and noticed Rob offering his from Warsaw, Ohio, a town nearby.

“How do you know Brian Jennings?” started the conversation between them.

The two became friends and planned on a whitewater rafting outing in the future. Shortly thereafter the pair discovered they also shared another common interest. They both shared a knowledge of alcohol production.

Rob approached Larry with a business model he had produced for the creation of a distillery. Larry was currently employed as a police officer, and considered the plan.  Tragedy struck again when Columbus SWAT Officer, long time friend and co-worker Steve Smith was killed during a stand-off on April 12, 2016. Although there is much more to the story, Larry approached Steve Smith’s widow and children and asked “What if things changed and I opened a distillery? I could make any label I wanted. I could make a bourbon and call it ‘1386’, Steve’s badge number.” The family approved of the idea, so Larry went back to Rob and said “Let me have a closer look at this plan of yours.”

Once again, there is much more to the story. Stop in for a tour to hear the rest.

Three days later he was at the distillery and was instructed on what buttons to push, what valves to pull. He was then told “Congratulations. You’re distilling your father’s bourbon right now.”

When what he distilled was collected and tested, it was found that his product came out of the still at a perfect 138.6 proof. The only time that had happened before was on it’s initial maiden run of the 1386 Bourbon by Rob and Larry.

The two batches were barrelled separately from the rest of the 1386 Bourbon as it seemed too perfect. “The 1386 Bourbon, was cooked by the guy wearing badge 1386, and it came out at 138.6 proof? That’s a sign. We’re not meant to profit on this, we need to do something much better with it.”

What Rob, Larry, and Jesse decided was when the 1386 Honor Guard Bourbon ages and is bottled, whenever a first responder is killed in the line of duty in the United States, 1 bottle will go up for auction. The only way any one can get a bottle of this very special bourbon is to win that auction. 100% of the proceeds of that auction will go to the first responder’s family.


Store Hours: Closed for the season 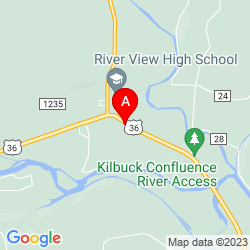